The Problem with Choke Tubes

When I was shooting competitive sporting clays, I was the Imelda Marcos of choke tubes. Couldn’t get enough of them. Stainless and ported, black oxide and with a color-coded constriction inset, knurled and short—I had ’em all from open to XXFull and dozens in between. The only one I never managed to get hold of was a jug choke I coveted for rabbit and other in-your-face target vaporization. You can’t have everything, I hear.

Choke tubes require more attention when it comes to cleaning than your barrels and most of the other parts you disassemble for cleaning. The two factors affecting this are the threads and the plastic buildup from wads.

Before I found the time-cutting solution I’m going to tell you about in a minute, my preferred way of cleaning choke tubes was to fill a small Mason jar full of Hoppe’s No. 9 and let the tubes I’d used that day soak. My version of dinner dishes in the sink for an overnight swim. I’d clean the rest of my gun, and by the time I was done the built-up plastic was easier to remove with a copper bore brush and some patches. Stubborn spots got the soft plastic or copper bristle utility brush, as did any ports, knurled ends, and the threads.

Thread grit is your enemy. It can ruin the threads of both chokes and barrels, and it can be a serious disruptor to fully seating your choke to the bottom of the threads, something that poses a possible firing hazard. A very careful, thorough wipe of your choke tube threads to ensure no grit remains between the highs and lows is the first order of business. The barrel threads are then treated to the same care, swishing around lightly lubed and then dry patches until they came away clean. Some like an extremely light lubricant on the choke tube threads before screwing them back in, and that can help get them unscrewed when you’ve got hot barrels. Just remember that too much can have your tubes unscrewing themselves as you shoot, something you do not want.

This detailed cleaning ritual worked, but it was tedious. More than a little elbow grease was needed when there’d been a long practice week followed by a two-day tournament in which cleanings were neglected until returning home Sunday night or the next week. Shoot 1,000 or more rounds a week without cleaning your tubes, and that plastic buildup will have you cursing. In addition, built-up grime between the threads can become cement-like—and there will be grime between the threads, I don’t care what brand of choke tube or gun you’re using. Trust me, the last thing you want to discover when you move from Station 7’s sets of 25-yard following pairs to Station 8’s 50-yard simultaneous minis is that you you’ve left your choke tube wrench in the truck and you’re stuck addressing Station 8 with a Skeet II constriction. That doesn’t help rack up the “Xs” on the ol’ scorecard.

You only need to leave that choke wrench behind once to make sure it always has a place in your on-course range bag after that. An improvement over that, I’d say, is to carry a Hoppe’s Bore Snake with you.

I started packing one in my shell bag every time I went on course, running it through both barrels of my over/under every couple stations or so. You can do it with a semi-auto or pump, too, and without disassembly. Just drop the weighted end of the Bore Snake into the open receiver (unloaded gun, of course) and down the barrel. Next, pull it through from the muzzle end as you would if the barrel were off the receiver assembly, though you may have to help some of the Snake through the narrow receiver as you won’t be pulling it in a straight line until the entire device is in the barrel.

Did this render my gun spotless at the end of a tournament weekend in which I might fire 400 rounds? No. Did it reduce my overall cleaning time? Yes it did. More important, the chore of choke-tube cleaning became much easier. No more long soaks in a Mason jar of Hoppe’s. No more scrubbing at the tough spots. Even the holes in my ported tubes had reduced residue buildup. A quick swab with a bore brush, patch with solvent, a dry patch or two, and a thread cleaning were all it now took to have my tubes back to squeaky clean.

Do yourself a favor. If you spend any time shooting trap, skeet, five-stand, sporting clays, or F.I.T.A.S.C., stuff a Hoppe’s Bore Snake in the side pocket of your shell bag. When it comes time for the after-shoot breakdown and cleaning you (and your choke tubes) will be glad you did. 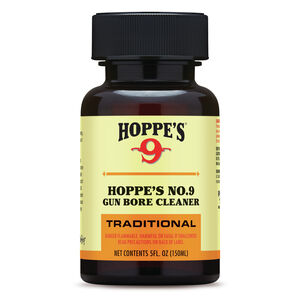 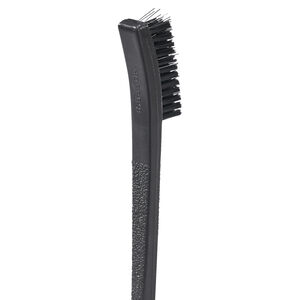 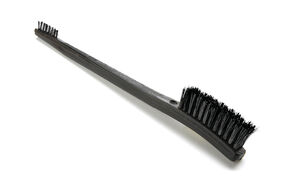 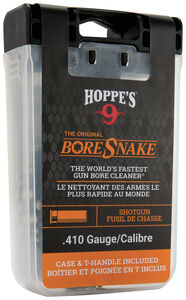 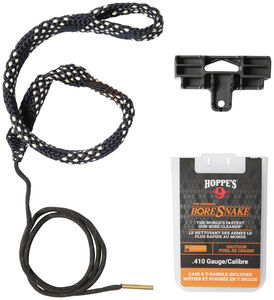